Having said so much about 7-year-old Raman and his challenges in reading, I feel it is important to share this episode that happened during remedial class this week. It reiterates my view that learning is not at all about reading & writing.

Raman was given this worksheet that you see below. 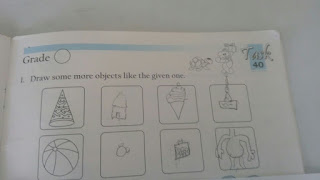 The instruction had to be read out to him by his teacher and explained to him in Tamil.

Then Raman proceeded to work on it independently. The first row was a cone, so he drew a hut having a conical roof, a cone ice cream & a birthday cake with a cone shaped icing (though to us it looks like a paper boat). Once he came to the second row, he gave it a lot of thought. The first figure was very easy for him. Then after a while he drew the second & the third.

He asked his teacher to take a guess. She said that the first one looked like a ring! He said,” No ma’am. It is a bid laddu with one kismis (dry grape) & one cashew nut!!

The second one was quite tricky! Teacher guessed that it was a bottle filled with pebbles! His answer was that it was a glass hundi (piggy bank) with round coins!

The last one of course was easy. He said that it was a police man’s paunch!

Originality, spontaneity, imagination & creativity of a child with so much potential!

This is an outstanding example of right brained thinking that children are so good at. Looking at things from different perspectives & making unusual & quite often hilarious connections is second nature to them.

It is my sincere hope that over emphasis on academics does not destroy their natural curiosity and spontaneity.
Posted by Unknown at 23:14